Recently, the Law Center added a Vehicle Residency Working Group to HNHJN, which meets every other month to work on fighting the criminalization of vehicle residency through policy reform, organizing, and litigation. HNHJN members are also invited to participate in “Special Meetings” that occur every few months and focus on discrete topics related to the criminalization of homelessness. In November, HNHJN members participated in a discussion on manufactured housing/mobile homes and related discrimination as part of this Special Meeting Series. Future topics for this series include Disaster Relief, Exclusionary Zoning, and Grassroots Organizing.

HNHJN members sign Common Interest Agreements prior to joining the network, which protects communications made in the working group meetings, and allows members to freely share information about prospective and pending litigation in ways that are conducive to collaboration and discussion. Additionally, HNHJN members are given access to HighQ, the Law Center’s online library of case materials, secondary sources, and research memoranda that are meant to aid lawyers and advocates in crafting legal arguments and ultimately challenging harmful policies that criminalize homelessness.

Members of HNHJN and lawyers at California Rural Legal Assistance and the Public Interest Law Project helped bring this case in the Central District of California against the City of San Luis Obispo. The Plaintiffs, a group of unhoused individuals and a nonprofit organization providing shelter services for people experiencing homelessness, challenged the City’s patchwork of ordinances that prevented unhoused residents from, among other things, camping or sleeping overnight in vehicles, being present in open spaces overnight, being present in parks after hours, and traveling outside designated trails or paths. Between May 2018 and June 2021, San Luis Obispo issued more than 300 criminal and administrative citations punishing people for violating these ordinances, with a majority of these citations being issued to unhoused people.

In April of 2021, a group of unhoused individuals living in Chico, California filed a Complaint seeking injunctive relief and monetary damages from the City of Chico and the City of Chico Police Department based on Chico’s enforcement of anti-camping ordinances and related encampment sweeps. The Plaintiffs were represented by HNHJN members from the Public Interest Law Project and from California Rural Legal Assistance. In July of 2021, the district court for the Eastern District of California issued a preliminary injunction enjoining the city and city police from enforcing encampment sweeps and camping bans. After a series of settlement conferences between August and December of 2021, during which the Plaintiffs’ attorneys readily consulted and collaborated with members of HNHJN, the Defendants agreed to settle with the Plaintiff.

In January of 2022, the parties reached a settlement agreement in which the City agreed to construct a Chico Emergency Non-Congregate Housing Site with at least 50 pallet shelters. The settlement requires the Housing Site to include 2 handwashing stations for every 50 occupants, 3 toilets for every 50 occupants, shower and bathing facilities, potable drinking water, garbage and waste disposal, laundry services, meal and kitchen areas, private meeting spaces for service providers, designated smoking areas, bike parking, pet run areas, personal property storage, and outdoor lighting, among other amenities. The settlement agreement stipulates that the Parties will confer and agree on the Housing Site’s policies and procedures, and that the Housing Site will be low-barrier entry, be open 24 hours per day and seven days per week, will not have any time limitations for occupants, and will not require participation in programs or services as a condition of admission. The agreement also provides that the City may not enforce its anti-camping ordinances unless and until the Housing Site is fully operation and has capacity for all unhoused individuals living in Chico and requires the City to give adequate notice to all unhoused individuals at least 7 days before enforcing any anti-camping ordinances.

Additionally, the settlement agreement includes provisions regarding the storage and seizure of personal property in public spaces and the maintenance of public sanitary facilities. As part of the agreement, the City also agreed to pay Plaintiffs’ attorneys’ fees.

HNHJN members from the Legal Aid Foundation of Los Angeles, along with pro bono counsel , filed suit on behalf of unhoused residents of Los Angeles to challenge the City’s policy allowing the City to discard publicly stored personal property. The challenged policy permitted the City’s Bureau of Sanitation and Police Department to conduct encampment sweeps without notice, during which City employees regularly prohibited individuals from moving their personal items and instead seizing and destroying such items. Plaintiffs contended that the “Bulky Items” provision of the policy which allowed for immediate seizure and destruction of any items deemed “bulky” was facially unconstitutional based on the Fourth Amendment’s protection against unreasonable searches and seizures.

The Legal Aid Foundation of Los Angeles worked actively with HNHJN on the formation and execution of this litigation, and the National Homelessness Law Center served as Amicus Curiae for the case.

A group of unhoused individuals living in Grants Pass, Oregon brought this lawsuit in the District Court for the District of Oregon to challenge the city’s outdoor sleeping and camping restrictions. Represented by HNHJN members from Oregon Law Center and Oregon Justice Resource Center, the Plaintiffs argued that the city’s enforcement of its outdoor sleeping and camping ordinances to criminalize unhoused residents of the city violated the Plaintiffs’’ Eighth and Fourteenth Amendment rights. They further alleged that the city had taken coordinated steps to drive people experiencing homelessness out of town by removing park benches, failing to create low-barrier shelter options, and offering to pay one-way ticket fare for unhoused people to leave the city.

In July 2020, the Court issued an opinion partially granting summary judgment to the Plaintiffs. The Court found that Grants Pass’ use of violations and fines to punish people for sleeping outside violated the Eighth Amendment and issued relief enjoining the city from enforcing the challenged ordinances.

Fort Lauderdale’s Food Not Bombs chapter, along with some of its individual members, filed suit against the City of Fort Lauderdale alleging that their First and Fourteenth Amendment rights had been violated by a City ordinance that restricted food sharing in public spaces. In addition to arguing that the ordinance violated their rights to expressive conduct and association, the Plaintiffs also argued that the ordinance was unconstitutionally vague.

At the district court level, the City won summary judgment based on the court’s finding that the Plaintiffs’ conduct of sharing food with unhoused residents of the city was not expressive conduct and that the challenged ordinance was not unconstitutionally vague. On appeal, the Eleventh Circuit reversed the district court’s finding that food sharing was not expressive conduct and remanded for a ruling consistent with the appellate court’s findings. Represented by HNHJN members from Southern Legal Counsel, the Plaintiffs submitted supplemental briefs to the district court, arguing that the ordinance was a content-based restriction on expression.

On remand, the district court found that the Plaintiffs’ conduct was expressive but that the challenged ordinance did not violate their rights because it was a content-neutral time, place, or manner restriction. The Plaintiffs appealed again, and the Eleventh Circuit held in August 2021 that the ordinance did violate the First Amendment because it was not narrowly drawn to further a substantial government interest and was not a reasonable time, place, or manner restriction. 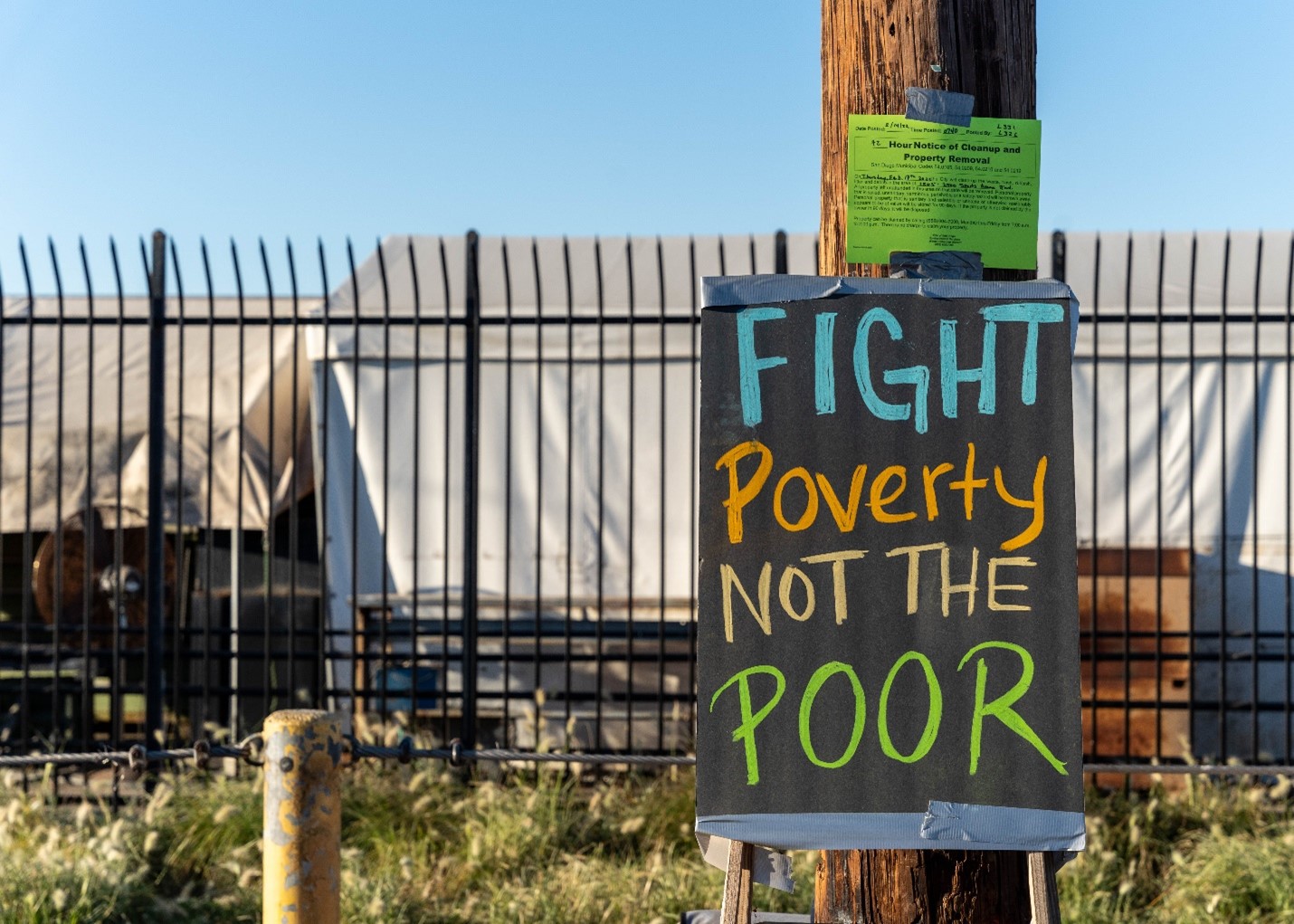 While You’re Here: Endorse the Housing Not Handcuffs Campaign