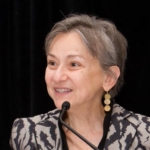 I’m writing during Hunger and Homelessness Awareness week, and just before our annual McKinney-Vento Awards event—which also aims to raise awareness as well as funds to support our work for solutions. These events are critical reminders.

But homelessness is a crisis every day and night of the year:

So as we raise awareness, we are also working to address the crisis:

It’s also just before Thanksgiving, and I am grateful to all my colleagues at the Law Center, staff and board, for dedicating their passion, talent and energy to using the power of the law to end and prevent homelessness in America. And we are all deeply grateful to our supporters, for making this critical work possible.

The Martin v. Boise case, brought by Idaho Legal Aid Services, the Law Center, and Latham & Watkins LLP, remains on possible appeal to the Supreme Court. On August 22, the city filed its official petition asking the court to “grant certiorari,” or take the case. A week later, 89 different jurisdictions, organizations, and individuals filed their amici, or friend of the court briefs, in support of Boise’s petition.

On October 25, the Law Center and its partners filed our response, asking the court not to take the case and to let the decision stand. The city has filed a response brief, and then we expect the Court to consider the case in early December, and to find out its decision soon after. Potentially it may take longer if there is disagreement or desire for further consideration.

We hope the Court will deny the petition, and that we will be able to go forth with a strong strategy to use the decision to promote Housing Not Handcuffs in the 9th Circuit and beyond, but we will be prepared for either scenario. Stay tuned—we will let our supporters know as soon as possible!

On October 10th, the Law Center’s pro bono partners at Dechert LLP delivered a letter to Austin, TX’s City Hall regarding a recent conflict between Austin’s city council and the governor of Texas, Greg Abbott. The City of Austin had revised previous ordinances criminalizing homelessness in June. However, the city then came under pressure from Governor Abbott to reinstate the penalties. The Law Center advised the city to stay the course on decriminalization in its letter.

As the Austin City Council convened to discuss a course of action on October 17th, a representative from Dechert LLP, speaking on behalf of the Law Center, further reinforced the points that criminalization was costly and ineffective, and that an approach emphasizing housing, not handcuffs, would be the best way to prevent and end homelessness.

But despite our efforts, the city council reinstating some aspects of the rules repealed in June. However, the laws have not swung fully back to the way they were prior to June, marking at least some degree of progress  achieved. The Law Center remains concerned about the situation in Austin, especially in light of the governor’s continued intervention with sweeps and other criminalization efforts. We will continue to work with the city and local partners in an attempt to ensure the city’s unhoused population is not harmed by criminalization.

In February of this year, Southern Legal Counsel and the National Law Center on Homelessness & Poverty sued St. Johns County Sheriff David B. Shoar and Florida Highway Patrol Director Gene Spaulding on behalf of Peter Vigue, a St. Augustine resident who has been repeatedly arrested for standing on the public right of way and soliciting donations. Prior court rulings found the statutes these arrests were made under to be unconstitutional, but they are still enforced. However, late this September, the Florida Highway Patrol Director came to a settlement with Vigue and his counsel, which will limit enforcement of the challenged statutes throughout the entire state of Florida.

Three Years of the Housing Not Handcuffs Campaign

This past Friday, November 15th, marked the third anniversary of the Housing Not Handcuffs Campaign. The Housing Not Handcuffs Campaign combats laws and policies that seek to criminalize people experiencing homelessness. Instead of addressing why residents are experiencing homelessness, cities have increasingly turned to punitive responses, such as criminalizing sleeping outside, in a tent, or in one’s vehicle. Enforcement of these tactics is ineffective, expensive, and only further stigmatizes unhoused people. Instead, cities should work to ensure its residents have access to affordable housing so that no one has to experience homelessness. With your support, the Housing Not Handcuffs Campaign has gained over 1,000 endorsers, reaching passionate individuals and organizations nation-wide. To further support the Campaign, please share the campaign’s message on social media with #HousingNotHandcuffs, and encourage others to endorse here.

Since 1989, the Law Center has used the power of the law to advocate for millions of people whose voices are seldom heard. Today, we are so excited to celebrate the work, dedication, and successes of leaders who advance solutions to end homelessness and poverty.

Our gratitude goes out to everyone who made the McKinney-Vento Awards possible, including our event sponsors, supporters, and volunteers!

A SPECIAL SHOUT OUT TO OUR SPONSORS: 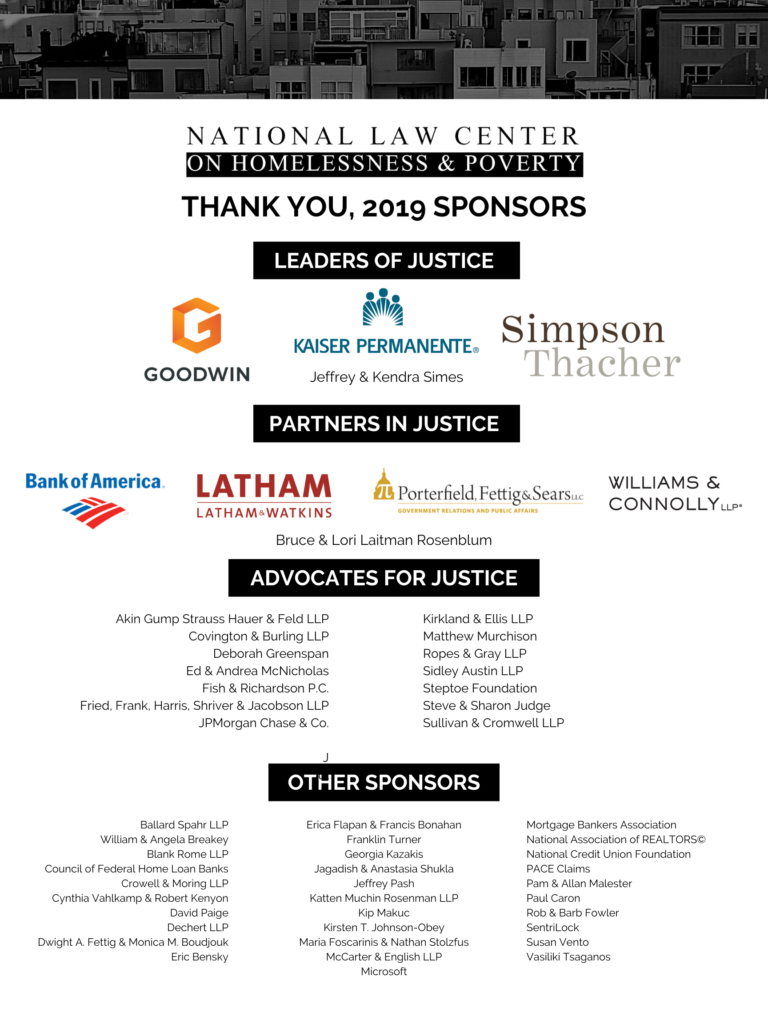 We hope everyone has a great time tonight and don’t forget to use our hashtag #McKinneyVentoAwards to be featured on our Twitter moment and timeline!

Washington City Paper (10/24/2019) In Emails to City, NoMa Residents Call for Underpass Encampments to Be Cleared

Deseret News (10/19/2019) People who can’t afford rent are living in their cars, and cities aren’t sure what to do about them

The Bakersfield Californian (10/19/2019) COMMUNITY VOICES: Ending homelessness as a community